Fusion 3 review We'll start with the individual features and then compare the two where the new features overlap for example, Windows 8.

As usual, I won't be reviewing these programs from scratch, so readers who aren't sure how they currently stand should read our previous comparative reviews. Version 9 is no different. As one of the more frequently used OS X writing tools, the contextual dictionary and thesaurus availability on Windows client VMs is definitely a welcome addition.

If you are writing and want an alternate word for something you've written, just hit Command-Control-D, and you'll get a definition of your selected words as well as some synonyms.

It's a great tool. While it may not seem like a big addition, for those who use Dragon Dictate in Windows or Office in a VM, it's going to be invaluable. It's not always flawless, however. The definition is appearing below the VM window. But I only saw that once in a while. Otherwise, it's a shame this feature isn't available to other client OSes although I don't think a lot of people are using Linux for Open Office.

Power Nap features If you have a recent-ish portable Mac that supports Power Nap—the technology that lets your sleeping machine do tasks with one eye open while consuming minimal power—then Parallels Desktop 9 can take advantage of this by enabling updates to Windows VMs while asleep. To test it, I started a large Windows update and closed the lid of my Power Nap-capable MacBook Air and checked in occasionally to see its progress.

Predictably, it moved much slower through the update tasks. Still, when I came back in the morning, the VM was up to date and had rebooted with the installed updates.

Obviously, you don't get this type of thing for free in terms of power, so if you're worried about battery life, double-check in the system preferences that Power Nap is off on battery power—that is the default setting. Otherwise, this is a perfect example of something you'd like to do while sleeping a machine overnight, and Parallels definitely gets points for thinking ahead here. It's a shame it's not supported for OSes other than Windows, though. Version 9 adds full support to DirectX 10, and seeing a new game like Bioshock Infinite run in a VM on high settings is pretty amazing for its technical accomplishments: It's a slideshow at times, but it's still impressive for virtualization.

Yes, there is a Mac version of this game, but I chose this program because of that limitation and because it comes with a benchmark utility. In a similar vein to Fusion 5's addition of OpenGL support for Linux VMs, obtaining a top speed isn't as important as adding support since many apps simply refuse to run without it.

There are the rare professional 3D applications that default to DirectX in Windows—Autodesk's Max being the most high-profile example. It's likely that some of these will move their minimum requirements from DirectX 9. Parallels has laid the difficult but much-needed groundwork to see it make it through this transition.

I think that DirectX 11, which supports tessellation, will take a lot more work to implement in a virtualized GPU, but the user need for that is years away, thankfully. It's more pressing to support OpenGL 3 and above since Version 2. It was showing the exact same screen rendering as the AMD Catalyst drivers in Boot Camp from what I could tell, and that's impressive considering the shader complexity in Bioshock Infinite. If you're looking to play a Humble Indie Bundle-type game that's DirectX 10 only, Parallels Desktop 9 should work fine on recent hardware.

Since there are two of them, I wonder if they will be able to implement CrossFire to use both GPUs in a virtual machine. Dare to nerdy dream. Unfortunately, neither the name of my Thunderbolt drive nor any indication it's on the Thunderbolt port are shown. Instead, you get a serial number and generic device ID.

If you are daisy chaining devices on Thunderbolt, those work fine, and my inch Dell screen still worked the same way passing through my Parallels-mounted Lacie 2big. At first, since you can already share drives to the VM, I was a little confused as to why this disk sharing scheme would be useful. Cloud sync I frequently test my Maya scripts for compatibility in Linux and Windows.

They are already in my Dropbox folder, so it's a big boon to not have to set up redundant Dropbox installs for my VMs. Parallels automatically detects what cloud apps you have installed and sets up that environment for your client VMs. For Dropbox, SkyDrive, and Google Drive, I know I could just share that folder separately, but having the Dropbox folder readily available is a nice touch. The iCloud integration is the most interesting since it exposes the innards of iCloud as a filesystem, sort of FUSE style: It was a flawless experience overall.

My only real complaint about the cloud integration features is that they are only available to Windows VMs.

This seems to be a mantra that's growing increasingly loud at Parallels. 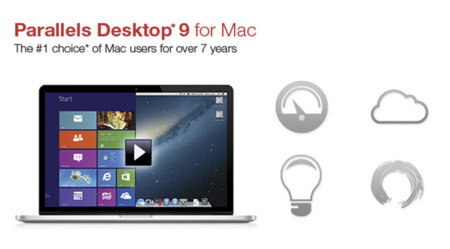 But, a problem arises: What about those Windows apps? Introduction I have been a huge proponent of virtualization for quite some time.

How to Install or Upgrade to Parallels Desktop 9 for Mac